A business with lots of ups and downs, is climbing to new heights. 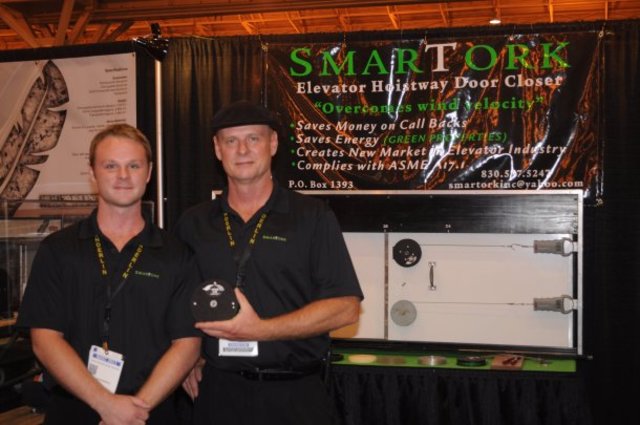 CORPUS CHRISTI – A business with lots of ups and downs, is climbing to new heights.

The late Kelly Marshall, owner of the former Corpus Christi business Marshall Elevator, scribbled an idea on a napkin at Andy’s Kitchen in 1984 that is now closing doors around the world.

“I had taken a trouble call the night before,” said his son Kelly Dean Marshall, 53, an elevator mechanic. “I told dad we sure need to fix that problem so we don’t have to keep going out there.”

“Dad grabbed a napkin and drew a spiral cable device similar to those on overhead doors,” he said.

The younger Marshall built a prototype by combining overhead door and elevator door parts. When tested with a fish scale it showed that the pull gets stronger as the end of the cable winds onto the spool.

SmarTork, being made since January in Boerne, is called a spirator. It overcomes wind velocity that has stalled elevator door closures for decades, and does it with less electricity, making it a green product.

“Dad never got to see it go, and never got credit for it,” said Christopher Marshall, 48, who is now manufacturing and marketing his dad’s device for an anxious world.

The elder Marshall died in 2004, two years after a stroke.

His family received the patent last week, after it had been pending nearly 14 years.

The device — first tested at Wilson Plaza in Corpus Christi then used at NAS Corpus Christi — is now ending problems with wind in high-rise elevator shafts that have existed since cable-suspended lifts were created.

Big doors have been opening recently for this device that closes them, said Vicki Marshall, the elder Kelly Marshall’s wife.

Her husband was born in Kenedy in 1938, and they met through friends in Corpus Christi, had three children, adopted one, and other youngsters lived with the family over the years, she said.

Her husband worked for Central Power and Light Co. about 25 years, before launching his elevator company, which the family operated about 20 years before selling it to a Canadian company.

He was a natural problem solver, his wife said.

“Kelly told me one time that his mind will not shut down if there was a problem, until he had the answer,” Vicki Marshall said.

“He said years ago his device has been needed for 50 years,” she said. “He told me, “I think this thing is going to fly.’

“But it has been a long trip,” she said. “We had given up twice, and we feel like the Lord called us to try it again.”

Hundreds of the spirators were set to be installed in the World Trade Center for testing when the Sept. 11 attack tumbled the Twin Towers, she said. A year later her husband had arranged funding for manufacturing and marketing the device, then suffered a stroke.

After his death, and lengthy delays with the patent approval, the dream went dormant, until her younger son rifled through some of his father’s materials about a year ago and decided to try again.

“We were shouting hallelujahs,” Vicki Marshall said about getting the patent.The conclusion followed an “Oh my gosh” moment, she said.

“We planned to start with mom and pop companies, like ours was,” she said.

But her son Chris and grandson Auston took the device to an elevator show.

“Chris called me and said, ‘Mom, we are the show, everybody’s packing our booth.'”

Orders poured in from around the world.

“It’s definitely an emotional roller coaster,” said Auston Marshall, 24, a student at University of Texas San Antonio. “When a door of opportunity opens, we enter in a walk of faith with no expectations, but no limitations.”

Others whose lives they have touched have joined the charge.

A man who grew up in the Marshall home, Gordon Johnson, is an international lawyer. He helped the Marshalls establish software for the SmarTork website that takes orders in six languages.

“It’s been amazing,” Vicki Marshall said, “and I tell the kids, ‘Let’s hope it don’t blow up again.'”

The family has strong religious faith, and plans to use their patriarch’s financial success to establish a foundation to help others, she said.

“My children and their families are all very people-oriented givers,” Vicki Marshall said. “We don’t need anything else, we’re comfortable. We want to set up a foundation in dad’s name, to help people.”

SmarTork already gives 10 percent of its proceeds to charity and ministries that serve others.

“I wish Kelly could have lived to see it go this far,” his wife said. “It’s just crazy, great.”

2011: Profiled in elevator and engineering magazines

2012: Patent approved, website set up for orders in six languages