The SmarTork™ reel closure was conceived by Kelly L. Marshall in 1986 while having coffee with his sons, Dean and Chris Marshall. Dean needed ideas on how to stop persistent call-backs involving elevator doors subjected to high wind loads on the Gulf Coast. Kelly proceeded to sketch on a napkin how a conical spiral might solve the problem. Dean combined garage-door parts and elevator parts to design the first prototype. After spending tens of thousands of his own U.S. dollars on R&D, Kelly decided to utilize plastic mold injection to make a cost-effective product; this resulted in an operational prototype. 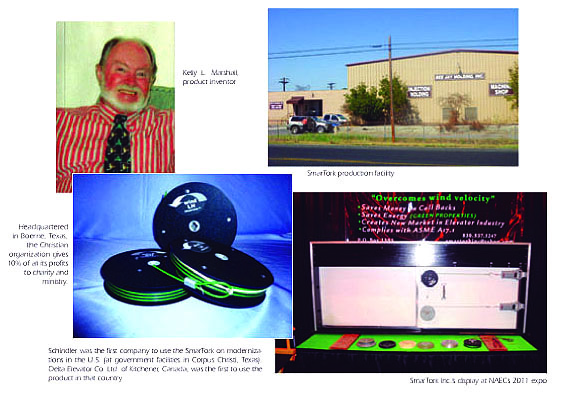 After seeing a demonstration, a federal inspector had difficulty understanding how the product significantly increased tension at the door-closed position and reduced tension in the open position with the spring winding. The inspector stated, “When you get this manufactured, all federal and government buildings could be required to have this on their elevator doors; this is not just a closer, it’s a safety device!”

By 2000, patent status and design had been established well enough to take the reel closure to that year’s National Association of Elevator Contractors (NAEC) expo in Minnesota. There, after watching a demonstration, a passerby wanted 10,000 units for the World Trade Center’s twin towers. Kelly worked diligently to get a business plan together and banking in place to meet the request, but the 9/11 terrorist attacks made the order void.

After Kelly’s death in October 2004, his dream was put on hold until October 2010, when his youngest son Chris registered SmarTork Inc. with Texas at the end of 2010. Chris then reestablished patent status, did due diligence and costs analysis, developed a business plan, and had the product tested by a third-party research center. Here, 500,000 cycles were operated before increasing tension by 50% and operating an additional 250,000 cycles. The result was “no significant deviation in torque and tension ratios.” Chris then found two initial investors as partners, had prototypes machined and aggressively approached elevator companies and owners.

A case study at Wilson Plaza (a 16-story building with four commercial passenger elevators in Corpus Christi, Texas) was conducted on October 21, 2010 to determine the amp reduction a SmarTork reel closer would have on an elevator door operator in comparison to a conventional door closer. Each closer was cycled four times with the highest peak amperage dropped on each, with the remaining averaged. The 42-in. bi-parting door with a 24 VDC Mac door operator and 104 board was tested using both devices, and the SmarTork™ provided 9.2% (.33 amps in peak amp loads) energy savings per door-operator cycle. The product was also found to be compliant with ASME A17.1 and ASHRAE 90.1 guidelines as they apply to overall building savings.

Thus, it was discovered that by the reduction reaction of tension in the opening cycle, amps were also reduced, saving power. Environmental Protection Agency Energy Star representatives have mentioned possible Energy Star labeling of the product and potential tax incentives applicable to qualifying building owners.

SmarTork’s™ “Unihub” allows reel closures with a dual pin or square shaft-mounting system to be replaced. The company recommends that for optimum results, all closers on each floor of each elevator be replaced. The product is intended to replace conventional closers entirely (both in new installations and retrofits) as its benefits of crossing the spring force (torque) and cable force (tension) ratios become more widespread. The product was officially launched at the 2011 NAEC exhibition in New Orleans in September.

The product has a two-year warranty and is made in the U.S.

Elevator hoistways are, in essence, wind tunnels. Constant airflow creates great pressure in these shafts. The only escape for it is through the hoistway doors when they open and close. A door operator on the elevator cab opens them, but the closing of the exterior doors is assisted by a reel closure. This is the most vulnerable point of the system. Air pressure rushes in and out trying to prevent closing, which usually prevents proper latching of the interlocks and keeps contacts from matching up. The result of this is a broken safety circuit; thus, failure to the elevator system and operation. This is the number-one call-back in the industry today. Millions of U.S. dollars are lost each year by service companies on these non-chargeable call-backs.

The typical existing reel-closure system has a coiled spring encased with a hub in the middle and a cable butt ended to the casing. The vulnerable point is that the torque tension ratio is in direct relation. When the door is open, the spring is wound up to its tightest point, and the tension is at its highest. When the door closes, the spring torque decreases, as does the cable tension. Obviously, more tension is needed at closing. In addition, over a period of time, this spring wears down and a mechanic is sent to “wind it up again.” This results in a loss of time and money for elevator companies and ultimately prompted the invention of the SmarTork™.

SmarTork Inc., headquartered in Boerne, Texas, is a Christian organization that gives 10% of all its profits to charity and ministry.

Smartork: Schindler was the first company to use the SmarTork on modernizations in the U.S. (at its Corpus Christi, Texas, offices). Delta Elevator Co. Ltd. of Kitchener, Canada, was the first to use the product in that country.